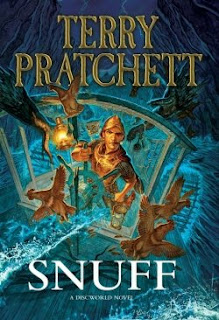 The Blurb: At long last, Lady Sybil has lured her husband, Sam Vimes, on a well-deserved holiday away from the crime and grime of Ankh-Morpork. But for the commander of the City Watch, a vacation in the country is anything but relaxing. The balls, the teas, the muck—not to mention all that fresh air and birdsong—are more than a bit taxing on a cynical city-born and -bred copper.

Yet a policeman will find a crime anywhere if he decides to look hard enough, and it’s not long before a body is discovered, and Sam—out of his jurisdiction, out of his element, and out of bacon sandwiches (thanks to his well-meaning wife)—must rely on his instincts, guile, and street smarts to see justice done. As he sets off on the chase, though, he must remember to watch where he steps. . . . This is the countryside, after all, and the streets most definitely are not paved with gold.

I must confess that I am a huge Terry Pratchett fan. I have been one for years, and I'll defend his world and works  to any who dares to belittle his works or who is insane enough to try to discuss it with me after a few drinks. Ask my wife, I do not stop, go in circles and basically bash you over the head with my argument until you agree with me, if only to make me stop. That's how big of a fan I am. I'll try to be impartial in my review, but that's probably a lost cause.

This time most of the action happens at Ramkin Hall, Lady Sybil's childhood country home, and now belonging to Sir Samuel Vimes, Duke of Ankh and Commander of the City Watch. The all round hero, policeman and mainly city rat. He is out of his element and he knows it. His first real holiday since for ever.

A lot of people arguethat Sir Pratchett's earlier works are better. That he has lost his edge. I won't say better, but they are more satirical and laugh-a-minute without question. That is understandable, with old age and that bastard Altzheimer's looming over a person, I'm sure that satire seems a bit difficult to achieve. The guy has sold over 70 million books. And his books are the most stolen on earth. True story. The guy is a legend.

Willikins emerges as a bodyguard in this book, and that transformation that started in Thud! is complete. Vimes has someone from his own background that he can trust with his and his family's life, and I feel that it was needed to help keep Sam Vimes sane. Good touch that. And it made him bloody good fun to read.

Sam Vimes Jr is six in this book, talking, running and collecting poop. It will be interesting to follow the development of Vimes II, and I'm sure that all the fans will love him.

Oh yes, and there are Goblins. The theme of introducing new races are continuing, and that helps to keep the stories fresh. The Dwarves, Fey, Trolls and Undead has been done, and done brilliantly. The Orcs and Goblins should shake up The Discworld and shake out some new tales.

All in all, Snuff was an enjoyable read. Not as funny as his earlier works, but I've covered that. A bit darker for Pratchett, but it is done well and the darkness matches the Vimes books. It was an honour as a fan to read. I'm pretty sure anyone will enjoy it.