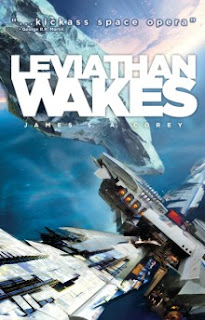 The Blurb: Welcome to the future. Humanity has colonized the solar system – Mars, the Moon, the Asteroid Belt and beyond – but the stars are still out of our reach.

Jim Holden is XO of an ice miner making runs from the rings of Saturn to the mining stations of the Belt. When he and his crew stumble upon a derelict ship, The Scopuli, they find themselves in possession of a secret they never wanted. A secret that someone is willing to kill for – and kill on a scale unfathomable to Jim and his crew. War is brewing in the system unless he can find out who left the ship and why.
Detective Miller is looking for a girl. One girl in a system of billions, but her parents have money and money talks. When the trail leads him to The Scopuli and rebel sympathizer, Holden, he realizes that this girl may be the key to everything.
Holden and Miller must thread the needle between the Earth government, the Outer Planet revolutionaries, and secretive corporations – and the odds are against them. But out in the Belt, the rules are different, and one small ship can change the fate of the universe.
This is the first book of the Expanse by James S.A. Corey, who is the pen name of Daniel Abraham and Ty Franck. It is brilliant. I can stop the review right there. Go and read it.
OK. A few words. It seems that Abraham and Franck wrote the two main characters, Miller and Holden's chapters on their own(ish), then polished the complete work together so that it flows nicely. I thought that it would be difficult to get into the flow of the book, but I was really pleasantly surprised. The brilliant upshot of writing in a team is that the two main characters each have a very distinctive voice, character and thought pattern. Holden is the crusader of righteousness, Miller the semi-alcoholic burnt out detective.  They react differently to the same pressures, and it makes for some fun reading.
The setting of the book is mostly in the Kuiper Belt, with people who work and live there seen as the lower class, scummy part of our universe. It's the industrial district of space. Mars is terraformed (mostly) and being lived on and Earth still exist, which is nice. All three cultures hate each other, which is right up our human nature alley.
Holden starts to flounder the deeper into the plot we go. His black/white world view starts to struggle when morality is more a shade of grey. He sticks by his decisions, come hell or high water. He stands by his crew, and he deserves respect for it.
Miller is my favourite though. Drunk for the first part of the book, hallucinating and half insane for the rest. He sees the world as it is. Broken and cynical. He does what he knows is right, even at major cost to himself. All for the best of humanity.
I was put off from science fiction for quite a few years, but these guys has restored my faith in the genre. Epic scope, brilliant characters, believable physics for a sci fi book and loads of fun!
Hell, it was good enough the keep me off Skyrim last night.
10/10
Posted by johann at 10:18