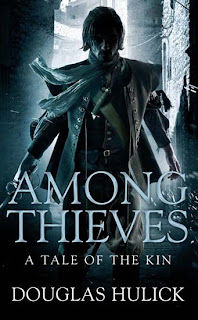 The Blurb: Drothe is a Nose, an informant who finds and takes care of trouble inside the criminal organization he’s a part of. He also smuggles imperial relics on the side.

When his boss sends him to Ten Ways to track down who’s been leaning on his organization’s people, Drothe discovers hints of a much bigger mystery. Someone is trying to stir up trouble between lower-level criminal organizations, including the one Drothe belongs to. And there’s a book rumored to contain imperial glimmer (or magic) that a lot of very dangerous people seem to be looking for - including two crime bosses known as the Gray Princes.

When Drothe discovers the book, he finds himself holding a bit of swag that can bring down emperors, shatter the criminal underworld, and unlock forbidden magic…that's if he can survive long enough to use it.

After I finished the frankly lovely Prince of Thorns a while back, I was a bit stuck what to read. Then, as if by miracle, the friendly guys over at fantasy faction had a "best book of 2011" list going. A lot of the guys on the forum suggested it, so I gave it a go.

Drothe is a criminal. Working for an organisation as a nose, collecting rumours and starting them, protecting his boss and his interest by anticipating what is going to happen based on the information he gathers. Drothe hangs out with Bronze Degan, who is a member of a group of mercenaries. They are fast friends. He's the muscle, Drothe the brains. Is it sounding familiar yet? A lot like Lies of Locke Lamora? That is the main reason why I waited before reading this, since Locke Lamora was bloody brilliant, and I wasn't in the mood for a pale imitation thief story.

It starts slowly. Very slowly. The story plods along a bit at first as Drothe does his job, mainly as a mid level criminal. As bigger players are introduced, the pace picks up and the story just sucks you in. Drothe and Degan deals with people who they thought of as legends at the start of the book. The Empire and the history behind he Emperor hints at delicious stories to come. Hulick put in quite a lot of legwork on the imperial history, but since it fits it doesn't detract from the story. The thief slang that he uses throughout the book is a bit confusing for the first twenty or so pages, but when you get used to it it really adds to the book. Hulick even explains at the end where he got his ideas and the words from, which was quite a nice touch.

Drothe thinks he is a good guy, but he is a bastard. Throughout the book he betrays just about everyone, justifying his actions as he moves along. That make for some compelling reading, since in another novel Drothe could easily be the bad guy in stead of the hero.

Is it the same as Lies of Locke Lamora as so many people say? Well, both deals with thieves and both happen in a city, and that's about it in my opinion. The characters are vastly different, and the cities as well. It's a brilliant book and you won't be disappointed if you buy it.