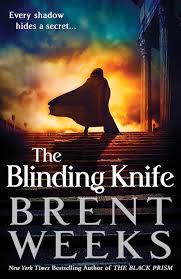 This is the second book in Mr. Weeks' Lightbringer series. I've read his first Trilogy, The Night Angel Trilogy as well as the first book in this series, The Black Prism. Since I read them before the blog was really up and running, I've decided not to do fuzzy reviews about half remembered facts.

This makes the review a bit tricky since I do not want to spoil the first book too much, but I'll muddle through. It's also the reason I've left the blurb out.

Mr. Weeks is damn good at worldbuilding and magical systems. This is an indisputable fact. He spends quite a bit of time on the setting and the mechanics of his world, but he does this really well and it does not feel like some huge info dump. The countries, cities and overall world is well defined so that it's quite easy to keep up with what is happening where. I feel that being good at naming the places and countries is a massive help here.

The magical system is one of the stars of this series. There are certain people who are known as Drafters that can absorb certain colours, and then manifest this colours as magic. Each colour has it's own strengths and weaknesses of course, and the colour and usage of said colour is shown in the drafter's eyes. The more they use, the more their iris' fills up with their colour. Breaking the Halo leads to some unfortunate side effects, so there's a payment to the usage of power which always seems quite fair.

Then there's the Prism. He can Draft all colours and he's responsible for the balance of magic on the earth. Enter Gavin Guile, the current badass Prism. He's powerful enough to move mountains, but all in all he's a nice guy. He's witty and powerful, but he has his own demons he's struggling with. He's an easy character to like and quite fun to read.

The Prism has a bastard, seeing as it seems that powerful people always comes with one for some reason. Kip is a chubby smartmouth little bugger and he irritated the hell out of me in Black Prism. He's a bit better in The Blinding Knife, and I'm sure Mr. Weeks did this on purpose to show character growth and accepting of responsibility, but hell he can complain. Self doubt is all well and good, but when he starts kicking some serious ass one would expect most of it to be replaced by some confidence and bravado. Kip is still quite young in the story, about 17 I think, and at that age most guys feel indestructible. Performing some heroic feat as he did should have honestly given him a massive ego boost that just does not show up.

The supporting cast is well written and fleshed out, and some of their stories seems very interesting. There are quite a bit of spadework done for the next book which is fine and expected.

The one major issue I had with this book, except for Kip complaining about everything, was the pacing. The story would go along at a good clip and then at some points it seems to derail or wobble a bit, which made it a chore to finish. The fight scenes could have been done better, but were pretty solid throughout the novel. The evil guys are quite proper evil, so that irked me. There were some attempts at giving them redeeming characteristics, but not really enough. They are bad men doing bad things, and as such it was quite one dimensional.

It was a fun book, but not really my cup of tea. Things just really did not gel for me. There are some quite dumb decisions made just to advance the plot that left me wondering why the smart people in the story are so thick. The world and magic is wonderful, but the characters were just too irritating for me to like this book very much.