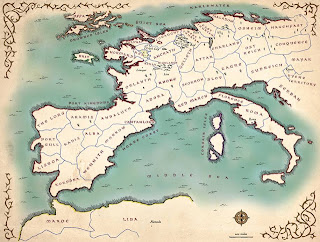 This is the pretty colour map for the Emperor of Thorns, Mark Lawrence's third book in the Broken Empire series. If it looks familiar, it's because Mr. Lawrence uses Europe as a base map and then drowns quite a bit of it. Blame the ice caps melting. All I know is that it's pretty and done damn well. This was stolen directly from Mr. Lawrence's blog, which can be found here.
Posted by johann at 11:24