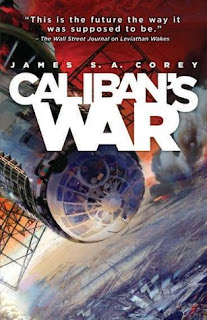 The Blurb: The alien protomolecule is clear evidence of an intelligence beyond human reckoning. No one knows what exactly is being built on Venus, but whatever it is, it is vast, powerful, and terrifying.
When a creature of unknown origin and seemingly impossible physiology attacks soldiers on Ganymede, the fragile balance of power in the Solar System shatters. Now, the race is on to discover if the protomolecule has escaped Venus, or if someone is building an army of super-soldiers.Jim Holden is the center of it all. In spite of everything, he’s still the best man for the job to find out what happened on Ganymede. Either way, the protomolecule is loose and Holden must find a way to stop it before war engulfs the entire system.

This is the second novel in Corey's Expanse series, the first being Leviathan Wakes. James S.A. Corey is the pen name for the collaboration of Daniel Abraham and Ty Franck, and if they wrote this the same way they wrote Leviathan Wakes, each concentrated on the one of the main POV's, in this case Captain James Holden, Captain of the Rocinante  and Chrisjen Avasarala, a powerhouse of an UN politician. Both wants to save the universe.

The blending of two voices and styles was done much better than the first book, as it reads seamlessly between the different POV's. Chrisjen, who serves as the Undersecretary of Executive Administration, is a stand out character in this book. I feel this must have been heavily influenced by Abraham, seeing as it reminded me of his astounding Long Price Quartet with the political machinations done in an interesting way. She plays the Game brilliantly, but she has a single driving force. To keep people safe and the universe out of an all out war.

Some new characters who also plays a huge role are also present. Gunnery Sergeant Bobbie Draper is a huge Martian Marine that lives through the slaughter of her whole platoon and has to struggle through the loss and keep her feelings of revenge in check. Praxidike Meng, a botanist from the breadbasket Ganymede, daughter gets kidnapped just before the unleashing of a new Protomolecule monster by some idiots, is the flame that lit the fuse in this novel. His single minded drive to find his daughter is done well, and I've felt his pain jumping off the page.

The depth of Corey's writing makes this book shine. There are no cardboard characters. Family ties are there and explained and the motivations are fleshed out, not just thrown in to move the story forward. I love the idea of humanity's drive to expand done in such a dirty, desperate way. It feels as if the space travel is real, and just beyond our current reach. No Warp Drives or Black Holes. Distance is a bitch in space and used as such. Oxygen and water is a problem that keeps everyone in check. Space Pirates that board ships and steal everything, including the air, makes all kinds of sense.

Now to the alien protomolecule that crashed on Venus in the previous novel. It's hinted at and talked about throughout the book, and the threat of something totally unknown a utterly alien hangs over everyone's heads. That is the crux of this novel. Humanity trying to prepare for an external threat, and loads of people with guns who are  twitchy is always bad.

As soon as I finished this book I realised it's almost a prologue for the next one in the series.  The problems they faced here is going to be as nothing during what is to come. Important events happened and events unfolded that's going to be critical in the future. It's not a problem, but damn I can't wait for the next one.