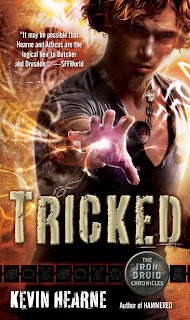 The Blurb: Druid Atticus O’Sullivan hasn’t stayed alive for more than two millennia without a fair bit of Celtic cunning. So when vengeful thunder gods come Norse by Southwest looking for payback, Atticus, with a little help from the Navajo trickster god Coyote, lets them think that they’ve chopped up his body in the Arizona desert.


But the mischievous Coyote is not above a little sleight of paw, and Atticus soon finds that he’s been duped into battling bloodthirsty desert shapeshifters called skinwalkers. Just when the Druid thinks he’s got a handle on all the duplicity, betrayal comes from an unlikely source. If Atticus survives this time, he vows he won’t be fooled again. Famous last words.

This is Kevin Hearne's fourth novel in the Iron Druid series. It's a pretty fun urban fantasy series thus far, with loads of comedic moments sprinkled throughout the book. This is what I've come to expect from Mr. Hearne's writing. If you do not laugh at least twice per chapter you have a broken sense of humour.

Atticus needs help to die and to hide after the chaos he helped organise on the Norse Pantheon. He turns to the Navajo trickster god Coyote to help him die, which may have been a mistake in the long run. I mean who in their right minds trusts a trickster god? He didn't really have any other choice, but it didn't make the decision any smarter. He also needs about twelve quiet years to train his apprentice Granualie in the art of being a Druid.

One of the most enjoyable aspects was the Navajo culture and history used as the main setting for this book. I know less than nothing about them, so it was fun to read about new gods and beliefs. It was a welcome break from the usually European based mythologies. Mr. Hearne has quite a way to make even the most powerful gods seem approachable and nice in stead of all powerful and wise.

Atticus also fills in some of his earlier years through stories he tells Oberon and Granualie, which supplied more than just a few laughs and gave him real depth. Having a main character that's older than two thousand years gives you loads of history to play with and it was nice to get more back story on the guy. Oberon is his usual entertaining self, he's the coolest dog in modern fantasy. It really makes me wish I could communicate telepathically with my pets.

Coyote tricks Atticus into helping him deal with some of the most monstrous creatures from Navajo myths, the Skinwalkers. Coyote knows Atticus will keep his word, seeing as he is a good Druid and cut from the old cloth as they say.  These Skinwalkers are damn evil and pretty damn scary as any good monster should be. Madness ensues.

Atticus being a druid makes for some interesting challenges. He cannot do anything to harm the earth and this permeates all his decisions. Earth comes first. It makes him a unique character and made for some interesting and creative solutions to the problems he faced. He's not all powerful and he does not think just of himself of just of winning, but of the well being of others as well as the well being of the world around him.

The book is solidly written, the jokes and dialogue are damn funny and the action scenes are well done. Siodhachan O Suileabhain is fast becoming one of my favourite Urban Fantasy characters.