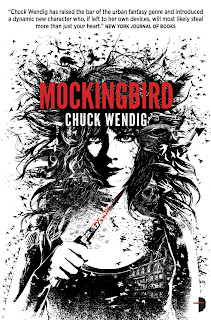 The Blurb: Miriam is trying. Really, she is.

But this whole “settling down thing” that Louis has going for her just isn’t working out. She lives on Long Beach Island all year around. Her home is a run-down double-wide trailer. She works at a grocery store as a check-out girl. And her relationship with Louis–who’s on the road half the time in his truck–is subject to the piss and vinegar Miriam brings to everything she does.
It just isn’t going well. Still, she’s keeping her psychic ability–to see when and how someone is going to die just by touching them–in check. But even that feels wrong somehow. Like she’s keeping a tornado stoppered up in a tiny bottle.
Then comes one bad day that turns it all on her ear.

This is the second Miriam Black novel, the first being Blackbirds - you can find my review of it here. If you haven't read it yet, for shame! Go and buy it. Read it, I'll wait...
First things first, the cover is awesomely unique. Joey Hi-Fi really outdid himself, but that happens quite regularly with all his covers. The guy is really good.

The book picks up a few months after the stunning ending of Blackbirds. Miriam is trying to live a normal life and it's not going well. Poor old suffering Louis is trying his best to provide stability to her life and she really hates it. She hates her job, the trailer she lives in and basically everyone around her. She is living an almost normal life, and Miriam does not seem to like anything normal.
She screws it up as she usually does and absolute chaos erupts. Miriam is really one damn disturbed woman. Totally batshit insane. She cannot connect in any normal way to the people who care about her. As soon as something goes a little right in her world, she sabotages it and runs. It makes for some compelling reading, but it'll be damn frustrating to live like this in the real world.
Miriam is on a mission to thwart fate once again. Not for money, but because she decided it's the right thing to do. This is the biggest difference between the first and second books in my opinion. Miriam tries to use her gift to do good. She saves those that she can, especially the helpless and hopeless. Fate does not like this meddling, and the hints are there that Miriam is being noticed by something or somethings that you really do not want to notice you.
The language and violence used in the book might disturb those with gentle constitutions, but you have been warned. Miriam curses more and better than a sailor, but as she sees death everywhere, she gets a free pass on that.
Some may feel that the story is too much like Blackbirds, but they are quite wrong. There are real character growth and development throughout the story, personal conflicts gets resolved and some real damn big issues are hinted at that's coming in the near future. I see Mockingbird as the second chapter in the Miriam Black story.
The writing and pacing is done well and really sucks you in. I destroyed this book in two days, and wished that the next one was out as well. The pages flew past without the story feeling frantic. That is pacing I enjoy.
The story is bleak, dark and gory. Despair and death seems to be everywhere. It's amazing.