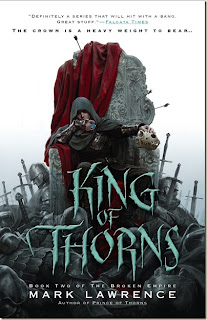 The Blurb:  The boy who would be King has gained the throne...
Prince Honorious Jorg Ancrath vowed when he was nine to avenge his slaughtered mother and brother—and punish his father for not doing so. When he was fifteen, he began to fulfill that vow. Now he is eighteen—and he must hold on by strength of arms to what he took by torture and treachery.King Jorg is a man haunted: by the ghost of a young boy, by a mysterious copper box, by his desire for the woman who rides with his enemy. Plagued by nightmares of the atrocities he committed, and of the atrocities committed against him when he was a child, he is filled with rage. And even as his need for revenge continues to consume him, twenty thousand men march toward the gates of his castle. His enemy is far stronger than him. Jorg knows that he cannot win a fair fight.But he has found, in a chamber hidden beneath the castle, ancient and long-lost artifacts. Some might call them magic. Jorg is not certain—all he knows is that the secrets they hold can be put to terrible use in the coming battle...

I won't lie, I've been waiting for this book since reading Prince of Thorns. I've been internet stalking Mark Lawrence for months, snapping up any and all hints, sneak peeks and deleted scenes. Hell, most of the fragments he's released has been reposted on this site.

The book is written solely from Jorg's point of view, with other character's thoughts only showing up as letters and interactions with Jorg. The four years between Prince of Thorns and King of Thorns isn't neglected though, since most of the story is told through flashback. Not classic blurry memory flashback, more through "four years earlier" but it's done well and interspersed throughout the current storyline. It supports and explains Jorg's actions and thinking, as well as consequentness of his previous actions coming home to roost.

Jorg is getting married. For those who knows Jorg, this might come as quite a shock. Our favourite little Captain Insane-o getting married? Can't be. Don't worry though, this happens four years after Prince of Thorns. The little bastard has grown up quite a bit.

Jorg's back story gets some perspective and attention in the book. This helps to explain why he sees the world as he does. There is a certain scene with Jorg and his father that made me feel physically ill. I can't remember the last time this happened, and it made me appreciate the writing so much more. You must be damn good to make me feel nauseous and uncomfortable. This certainly isn't criticism, it's praise. To suck you in and make you care so deeply that you feel so much is an art.

The rest of the world gets some fleshing out throughout the book. Quite a nice chunk of it gets explored by Jorg and his Brothers and new, interesting people and creatures are met. Not all of them are killed, which was quite nice.

There are some shady characters moving people and nations around as pawns and they are truly in the background, pulling the strings. There's even a bit of prophecy coming to the fore from them, pushing the world into a certain direction, but Jorg really does not care for prophecy or being controlled. They should have known better.

Jorg has really matured throughout this book. He cares for his friends, even if he won't admit it to himself. He starts to show empathy towards strangers and his people. He hasn't gone soft though. He'll burn the world if he feels it'll get him what he wants and he'll not shed a single tear. This point is proven again in the climax of the book. He may be a bit more cuddly that younger Jorg, but he's still the hardest and most calculating bastard in the Broken Empire.

This book is written so well, the characters are amazing and the world is unique and interesting. Jorg is still on his mission to be the Emperor of the Broken Empire, and he's daring anyone to try and stop him. Distant lands are also spoken of, which makes me wonder what stories will be written about them.

The Broken Empire has certainly jumped to the top of my favourite series pile. Go read this book. It's brilliant.