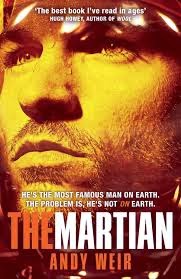 The Blurb: Six days ago, astronaut Mark Watney became one of the first men to walk on the surface of Mars. Now, he's sure he'll be the first man to die there.
It started with the dust storm that holed his suit and nearly killed him, and that forced his crew to leave him behind, sure he was already dead. Now he's stranded millions of miles from the nearest human being, with no way to even signal Earth that he's alive--and even if he could get word out, his food would be gone years before a rescue mission could arrive. Chances are, though, he won't have time to starve to death. The damaged machinery, unforgiving environment, or plain-old "human error" are much more likely to get him first.But Mark isn't ready to give up yet. Drawing on his ingenuity, his engineering skills--and a relentless, dogged refusal to quit--he steadfastly confronts one seemingly insurmountable obstacle after the next. But will his resourcefulness be enough to overcome the impossible odds against him?

This book appeared on my radar when I saw on twitter that it's been optioned for a movie. This got me interested. seeing as it's a pretty new book to me at least and I've never heard of it before. So off to Amazon I went and after a few dollars it arrived at my kindle, ready for my enjoyment.

Digging a bit further, I realised Weir self-published the book firstly in serial format on his website, then as an amazon ebook and after it sold spectacularly well a publisher picked it up for lots and lots of money. Good on Weir!

The book is mostly written in journal format by Mark Watney, detailing his trials and tribulations of trying not to die on Mars after a freak accident left him stranded there. Weir has a very fun writing style, interspersing the science with loads of jokes and cursewords to make the prose easy and fun to read. I read the whole book in two days, showing it's a gripping tale.

Weir did a lot of research, and apparently smarter people than me say that most of the science behind it is pretty damn accurate. His fixes to the problems he faces certainly are funny and it just makes it so much better to know that they could actually happen.

The pacing is very well done, and managed with the journal entries in a good way. Some stretches where everything is going well Watney rambles a bit, reminisces about his situation and the people on earth and basically relaxes, writing like someone who doesn't have anything better to do at that precise moment. It's not boring, I promise you. When the shit hits the fan however, the astronaut Watney steps out, and the entries are a lot more professional and goal-oriented, as it should be.

The book made me laugh out loud, root for the poor Watney and it kept my attention throughout. It's certainly the most fun I've had reading in quite a long while. A brilliant book.

Email ThisBlogThis!Share to TwitterShare to FacebookShare to Pinterest
Labels: 9, Andy Weir, The Martian