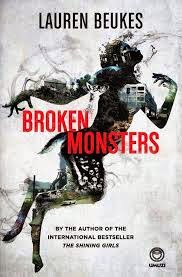 The Blurb: IN A BROKEN CITY, A DISTURBED KILLER IS TRYING TO REMAKE THE WORLD IN HIS IMAGE.
Detective Gabriella Versado has seen a lot of bodies. But this one is unique even by Detroit’s standards: half-boy, half-deer, somehow fused together. And it’s only the first.As winter closes in on Detroit, strange and disturbing corpses start turning up in unusual places, pulling several lives into the killer’s orbit.Gabi has to juggle the most harrowing case of her career with being a single mom to her troubled teen daughter Layla.Layla, egged on by her best friend Cas, is playing a dangerous game with an online predator.Broken Monsters is a dark and gripping thriller about the death of the American Dream, online fame, creativity, compromise and the undercurrents of the world we live in right now.

First off, hot damn what an awesome cover. It really jumps out at you and stands out pretty nicely on a bookshelf. Really stunning work by the stupendously talented Joey Hi-Fi.

Bliksem, this really is a damn good book. Really really good. If something interrupted my reading time, I got pretty cross because I wanted to find out what happened next. This rarely happens, but this book really grabbed my attention and had my imagination going into overdrive. Some real brilliant storytelling.

The book is set in Detroit in all it's decaying glory. I think the setting really mattered to the story, seeing as the crumbling city trying to get back on it's feet, trying to get a new identity, really set the tone for the characters.

This is a multiple POV story, and each has it's own distinct voice and character. TK, the ex con just trying to help people. Jonno, the asshat wannabe journalist looking for some direction in his life, Clayton the misunderstood artist who devolves beautifully during the story and Detective Versado and her daughter, Layla.

This book has quite a bit about the plodding side of policework present, which is pretty refreshing to read. How they plan, assign tasks and start chipping away at the problem in front of them.  How normal police work and procedure helps to insulate the poor bastards that needs to deal with the horrific on a daily basis.

Gabi is a single parent to a teenager, Layla. Layla is a theatre nerd, in love with the stage and thus awkward as hell. Her relationship with her best friend Cas is one of the few light and uplifting pieces of the book, and really well placed between all the darkness and problems. Gabi just want to keep her daughter and her city safe. She's hard, uncompromising and brilliant.

Jonno really is a whiney bastard. It's easy not to like the little turd. He feels the world owes him for some hardships he's suffered in his life, and he latches onto anybody that can help him. Easily my least liked character in to book, but I think that's what was needed from the clown.

TK and Clayton are broken men. TK trying to do the best he can with the shitty hand he's been dealt by life, and Clay getting crazier and crazier as the book progresses. They are both awesome.

Some freaky shit happens in this book.  Supernatural magic freaky. And it's the sudden shock of it introduced into the real world that makes it great and makes it stand out. It's violent and shocking and it gave me chills in a good way.

I think it's the ability of Beukes to give each character such a distinct personality on the page that really makes her a brilliant writer. It doesn't matter if it's a  teenage girl or the killer himself, they stand apart and distinct. It makes the reading part much easier and a boatload of fun.

This book is brilliant. I rate this as her best work yet. Stunning.