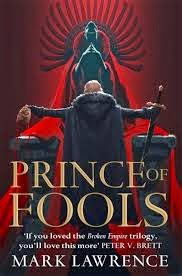 The Blurb: The Red Queen is old but the kings of the Broken Empire dread her like no other. For all her reign, she has fought the long war, contested in secret, against the powers that stand behind nations, for higher stakes than land or gold. Her greatest weapon is The Silent Sister—unseen by most and unspoken of by all.
The Red Queen’s grandson, Prince Jalan Kendeth—drinker, gambler, seducer of women—is one who can see The Silent Sister. Tenth in line for the throne and content with his role as a minor royal, he pretends that the hideous crone is not there. But war is coming. Witnesses claim an undead army is on the march, and the Red Queen has called on her family to defend the realm. Jal thinks it’s all a rumor—nothing that will affect him—but he is wrong.After escaping a death trap set by the Silent Sister, Jal finds his fate magically intertwined with a fierce Norse warrior. As the two undertake a journey across the Empire to undo the spell, encountering grave dangers, willing women, and an upstart prince named Jorg Ancrath along the way, Jalan gradually catches a glimmer of the truth: he and the Norseman are but pieces in a game, part of a series of moves in the long war—and the Red Queen controls the board.

As my one reader knows, I'm a huge fan of Mark Lawrence. His Broken Empire trilogy was one of the best I've read yet, and the finale, Emperor of Thorns, put me in a book depression for at least a month. It was that good.

The Prince of Fools is the first book in the Red Queen's war trilogy, also based in the Broken Empire landscape and at the same time as the first trilogy. I highly appreciated this, seeing as I love the world and the characters he's created. You can read Price of Fools without reading the first trilogy, but a lot of the nuance will be lost if you do that.

Onto Prince Jalan. He's tenth in line to the throne, a minor Princeling of the Red March and pretty much a bastard in all the other ways that Prince Jorg isn't. A self confessed coward, putting his wants and needs before everybody else. He's certainly not ambitious, whoring and gambling his life away in all the luxury being a Prince provides. As he says in the book, his priorities is Prince Jalan, Prince Jalan, Prince Jalan with looking good coming a distant fourth. That being said I found him an entertaining protagonist, bringing humour to quite a dark world. With us riding in his head as a first person viewpoint certainly helped in this regard. He reminded me a little of Rincewind I must say.

The fun thing about Prince of Fools, with it being set almost concurrently with the first trilogy, is the different viewpoints to the same events. Jalan doesn't really give a crap, but there are enough hints around him to make stuff interesting to the sharp eyed reader. A few old favourites makes short appearances in the story which was pretty awesome. And we get a little bit of a clearer view of the moves made by the powers behind the throne, The Silent Lady, Sageous and their power plays.

Jalan gets caught up in this secret war through no fault of his own, and forced to go on a quest to the frozen north with Snorri Ver Snagason, a huge insane Viking. Honestly the poor bastard had no choice, and he complains pretty much all the way there. OK, it was 30% his own fault, but you'd never hear him confirm that. Snorri is pretty much awesome muscle, power and cheer. He's the perfect counterfoil for Jalan and their interactions throughout the book is a fun read. Jalan actually shows some real character growth without losing his cowardly charm, and he certainly contributes to their quest, even if it's pretty accidental for the most part. I do not know if Snorri's surname is a nod to Gemmel's early works, but I certainly hope so. Those that do not know of what I speak, go read Legend you lazy cretins.

Our two heroes, one roaring north and the other screaming in terror, run into quite a few fun and dangerous adventures on their way. They even visit the Tall Castle, and Jal almost has the misfortune of meeting Jorg in his early wild days. I'm sure that if this happened, poor Jal's tale would have ended right there, seeing as Jorg would have used his blood to decorate the walls on principle. I have no doubt that Jorg would have taken Jalan out just because he irritated him.

The quest they are on certainly isn't standalone in the Broken Empire universe, and I'm sure the follow up books will clarify and intertwine the two stories more and more. This is easily one of my favourite books of the year, blending a quest adventure story with a deeper, darker one seamlessly. It certainly stuck with me, making me wonder about the implications.