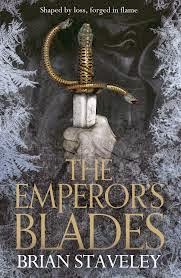 The Blurb: The circle is closing. The stakes are high. And old truths will live again . . .
The Emperor has been murdered, leaving the Annurian Empire in turmoil. Now his progeny must bury their grief and prepare to unmask a conspiracy.His son Valyn, training for the empire’s deadliest fighting force, hears the news an ocean away. He expected a challenge, but after several ‘accidents’ and a dying soldier’s warning, he realizes his life is also in danger. Yet before Valyn can take action, he must survive the mercenaries’ brutal final initiation.Meanwhile, the Emperor’s daughter, Minister Adare, hunts her father’s murderer in the capital itself. Court politics can be fatal, but she needs justice. And Kaden, heir to an empire, studies in a remote monastery. Here, the Blank God’s disciples teach their harsh ways – which Kaden must master to unlock their ancient powers. When an imperial delegation arrives, he’s learnt enough to perceive evil intent. But will this keep him alive, as long-hidden powers make their move.

This book has been sitting on my TBR shelf for a few months, I picked it up after seeing quite a few people recommending it on online forums where I hang out.

First off, I'm not really impressed with the cover. I understand it's a blade and ties up with the title, but I do feel they could have done a lot more with that.

The story follows the Emperor's three children: Kaden, who is studying with a bunch of weird monks in the middle of nowhere, Valyn who is training with the Empire's deadliest fighting force and his daughter Adare, who had to stay home. The Emperor is murdered and off the story goes!

I must say that Staveley can write. His characters are engaging, well thought out and with sparks of humour intermingled with the dialogue makes it a fun story to read with great rhythm.

Kaden, first in line to the throne, is training with monks to unlock mystical powers, as one does. He gets treated like crap, but it's for the greater good so that's fine. He gets passed on to one of the most mystical masters at the monastery, who basically beats the ever living hell out of him to get him to the state of mind needed for mysticism.

Valyn is basically training to be special ops. His parts are fun to read, seeing as it's jam packed full of action and training montages. The action is pretty well paced, and he quotes enough of the best dead general to show he's kept up with his theory as well as the physical training.

Adare is severely underrepresented in this book. She is the Empire's new Finance Minister, surrounded by old dudes who looks down on her. She gets three chapters to strut her stuff, which is pretty sad, seeing as the political intrigue angle is always interesting and pretty important in this book.

The action scenes are a fun read, the dialogue is slick and the chapters doesn't end on cliffhangers the whole time, which is greatly appreciated. I do have quite a few problems with this story.

First off, the Empire spans two continents. It's massive. The royal line is decreed by a goddess, with the family having pretty cool flaming eyes. Yet the heir and second in line gets sent to a monastery outside of the empire's borders and to do the most dangerous military training available. No bodyguards, no instruction to not kill the royal line, nothing. They do explain why Kaden needs to train with the monks in the books, but you'd expect a few royal guards or rangers to hang about and ensure his safety. That's just common sense.

I can almost believe that Valyn is sent to the military, seeing as he's second in line to the throne. But to the Kettral? Dudes flying special ops missions on giant birds? Where the training kills a crapload of the recruits? It was fun to read about the training, but I do feel it's a little strange that the Emperor's son would almost be fed to the wolves. And of course there is a bad student training with him. And of course he doesn't like or respect him. I understand that he needs an enemy, but his was clumsily done.

And Adare, who gets almost no page time. And the little she gets is pretty conflicting. She murders a priest in retribution of her fathers murder in a pretty awesome way, but then of course she has to jump into bed with the current Regent, because why not?

That's not all. My biggest issue is that the Emperor has been murdered. That means that Kaden is emperor. The Empire has giant ass birds working for them, yet a bird is only sent after a few months, just in time for Valyn to finish his training. I do get that there is a conspiracy to overthrow the royal family, but each and every decision maker in charge of the military can't be in on it. Otherwise it's not much of a conspiracy, but more of a coup. If all the bigwigs were in on this, they suck bad at overthrowing the royal line.

So there are quite a lot of things happening at precisely the correct time to ensure the story moves forward. The issue is that it doesn't happen because of logic or common sense, but because the story demands it, and this is irritating. Kaden getting his mystical teacher at just the right time to ensure he can do what he needs to just in time? Come on, why wasn't the old bugger teaching him from the start? And the monk has a mysterious past, which he refuses to discuss. And he's a fighting badass, because of course he is. This isn't fighting kung fu monks, they are meditating and painting monks. Even if he had some amazing skills with his weapons, he should have been rusty as hell, seeing as there wasn't anyone to fight or spar with in years. 50 bucks the monk turns out to be a magic user or immortal in the next book.

So in conclusion, a fun read, with a great world, good action and good characters. Just too many inconsistencies, story help-alongs and people being thick as walls to make it plausible. It makes it not my cup of tea in the end, which is sad.