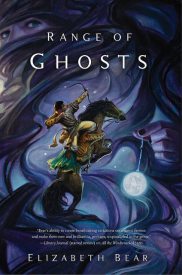 The Blurb: Temur, grandson of the Great Khan, is walking away from a battlefield where he was left for dead. All around lie the fallen armies of his cousin and his brother, who made war to rule the Khaganate. Temur is now the legitimate heir by blood to his grandfather’s throne, but he is not the strongest. Going into exile is the only way to survive his ruthless cousin.
Once-Princess Samarkar is climbing the thousand steps of the Citadel of the Wizards of Tsarepheth. She was heir to the Rasan Empire until her father got a son on a new wife. Then she was sent to be the wife of a Prince in Song, but that marriage ended in battle and blood. Now she has renounced her worldly power to seek the magical power of the wizards. These two will come together to stand against the hidden cult that has so carefully brought all the empires of the Celadon Highway to strife and civil war through guile and deceit and sorcerous power.

This book has been on my wish list for quite a while, and thanks to the good people of the David Gemmel Legend Award I got a chance to read it.

I love the cover. No hooded man here, just Temur on his horse with a striking background. It's quite striking and well done.

The book kicks of with Temur, grandson of the Great Khan, crawling out of a battlefield with a wound that should have killed him. The war to rule has taken a bad turn for his brother, and Temur knows he is alone. Exile is his only option. The setting is the steppe, quite like Mongolia with nomads and horses, with one big difference. The sky is filled with moons which represent the surviving members of the Great Khan's family, each one disappearing as the person it represents dies.

The second main character is Samarkar, princess of Rassan who gave up her claim to become a wizard. What's good about the magic system used thus far in the story is that there is a definite price paid for the power, and I appreciated it. No Will and Word or one in a thousand type of choosing done here. It's a concious decision that one takes and there isn't a guarantee that the sacrifice will lead to power, just the chance.

Both main characters are done astoundingly well, with depth, growth, insecurities and their own quirks. It was really refreshing to read some well rounded characters. The supporting cast gets more than enough fleshing out to make them interesting and is done with such skill that I even love Temur's horse. Now if you can give a damn horse enough personality to make him interesting without it becoming silly you know you are damn good at it.

The world Ms Bear created is awesome. Mongolia and surrounds with extra magic, different gods for different people, different skies and all in all damn interesting to read. Each land is quite different and the peoples described well. The evil guy is smart and ruthless with a definite long term plan he's working towards. He doesn't make many mistakes which in it self is refreshing. He won't be beaten by anything else than someone honestly better than him.

Magic is definitely important in this world, but not absolute. Power is gained slowly and costs a lot in effort and pain. You get the feeling that a well trained warrior stands a real chance against a wizard and that it would be a real good fight.

I do not have any real gripes with this book. It took a few chapters to get into it, but since this is the first time I've read any of Ms. Bear's work that's more than understandable. As soon as I got used to her rhythm and style I was sucked in. A few more light-hearted and funny moments wouldn't have hurt, but this isn't a light-hearted story so no real issue there. I'm nitpicking here.

For an opening novel in a trilogy this was amazing. I can't wait for the next instalment in The Eternal Sky trilogy.