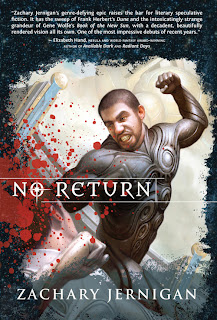 The Blurb: On Jeroun, there is no question as to whether God exists--only what his intentions are.
Under the looming judgment of Adrash and his ultimate weapon--a string of spinning spheres beside the moon known as The Needle--warring factions of white and black suits prove their opposition to the orbiting god with the great fighting tournament of Danoor, on the far side of Jeroun's only inhabitable continent.From the Thirteenth Order of Black Suits comes Vedas, a young master of martial arts, laden with guilt over the death of one of his students. Traveling with him are Churls, a warrior woman and mercenary haunted by the ghost of her daughter, and Berun, a constructed man made of modular spheres possessed by the foul spirit of his creator. Together they must brave their own demons, as well as thieves, mages, beasts, dearth, and hardship on the perilous road to Danoor, and the bloody sectarian battle that is sure to follow.On the other side of the world, unbeknownst to the travelers, Ebn and Pol of the Royal Outbound Mages (astronauts using Alchemical magic to achieve space flight) have formed a plan to appease Adrash and bring peace to the planet. But Ebn and Pol each have their own clandestine agendas--which may call down the wrath of the very god they hope to woo.  Who may know the mind of God? And who in their right mind would seek to defy him?

First off, not a fan of the cover. I do not know if I have been spoiled by some beautiful book covers recently, but this snarling dude put me off a little bit. Onto the book itself.

The world that Mr. Jernigan created here is simply brilliant. It's interesting with hints of history that should come into play in later books. With uncrossable oceans, all of humanity is landlocked on one continent. There are other continents of course, inhabited by Elders, a slumbering race that ruled in earlier times. The Elders do not decompose on death, and the people of Jeroun harvest their bones and use the dust as currency, their skins as armour and most of the rest as magical ingredients.

The god of this world, Adrash, abandoned the people years ago. and now float in space looking down on his world. He created the Needle, spheres spinning in space, as the ultimate doomsday weapon should he feel he needs to use it should the world go beyond saving.

The eldermen, children with some Elder DNA in their systems are born with some weird physical mutations and they can do magic. The Royal Mages are the astronauts of the world, using Alchemy to travel to space to observe Adrash and the needle. The politics going on behind the scene with the mages is done with a deft touch, as it is how it would be. Despite having a stated unity of purpose, the two most powerful mages Ebn and Pol each work privately to their own goals. Ebn's growth throughout the book is probably the best during the book, and his personal journey was the most satisfying for me.

Vedas is a badass. One of the best fighters in existence. Having grown up with the Black Suits, he knows violence and little else about the world or his place in it. He gets chosen to represent his Order in the tournament of Danoor. On his travels he meets the construct Berun, built by a mighty mage. Berun is also damn cool, an artificial man who shows good growth throughout the book for someone who isn't technically human. Churls is an ordinary mercenary  tasked with leading them to Danoor.

The naivety of Vedas was a little irritating at first, but as he got comfortable with his companions and his place in the world, he got a lot better to read. Doing so much in one book was difficult, but it's mostly done well.  Some of the fighting scenes could have been better, since some of them felt a little sterile. I understand that Vedas is a highly trained fighter, but having him feel some rage or desperation would have made him feel more human.

The real star of this book is the setting that was created. It's unique and interesting as hell. I can't wait to read more of the wonderful word of Jeroun.

A solid début and a wonderful world.

Email ThisBlogThis!Share to TwitterShare to FacebookShare to Pinterest
Labels: 7, No Return, Zachary Jernigan