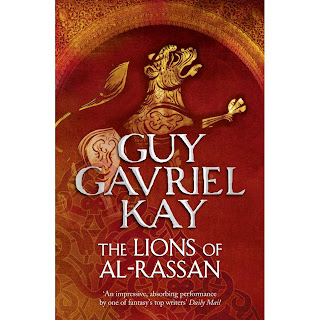 The Blurb: The ruling Asharites of Al-Rassan have come from the desert sands, but over centuries, seduced by the sensuous pleasures of their new land, their stern piety has eroded. The Asharite empire has splintered into decadent city-states led by warring petty kings. King Almalik of Cartada is on the ascendancy, aided always by his friend and advisor, the notorious Ammar ibn Khairan — poet, diplomat, soldier — until a summer afternoon of savage brutality changes their relationship forever.
Meanwhile, in the north, the conquered Jaddites' most celebrated — and feared — military leader, Rodrigo Belmonte, driven into exile, leads his mercenary company south.In the dangerous lands of Al-Rassan, these two men from different worlds meet and serve — for a time — the same master. Sharing their interwoven fate — and increasingly torn by her feelings — is Jehane, the accomplished court physician, whose own skills play an increasing role as Al-Rassan is swept to the brink of holy war, and beyond.

This review has taken forever to write, I don't know why.


I picked this book up on a whim in a second hand book store a while back, based mainly on that I've read Under Heaven a while back and loved it.

This book, according to the back cover, is based on the history of medieval Spain. This is quite a deviation from my normal reading, being heavy on the historical fantasy side and very light on the magic and mysticism.

There are three main POV characters in this novel. The Asharite Ammar ibn Khairan, poet and allround badass, The Jaddite Rodrigo Belmonte, allround badass, and the Kindath Jehane, the badass doctor.

It becomes clear that the Asharite people are based on the Muslims, the Jaddite on the Christians and the Kindath on the Jews. The religion of each as practiced in the book are completely different from their real world counterparts, but it does make understanding the politics in the background a bit easier. The Asharites has conquered the Jaddite lands of Al-Rassan, and everybody hates the Kindath.

Ammar of Cartada is a brilliant character. A world renowned poet and advisor to kings, he's also the killer of the last khalif of Al-Rassan. He's a terror with a blade, and his ultimate loyalty lies with his country if not with his king. He is world renowned, quite introspective and justifiably self assured.

Rodrigo Belmonte, the previous constable of Valledo is now the most respected Jaddite military captain. Also a masterful swordsman, probably one of the best military commanders alive and just a solid dude. He'll do what he knows is right and take the consequences of his actions on himself.

Jehane is a gifted doctor that has been caught up in world shaking events. She's a strong female character, and she provides a good counterpoint to the two men whose actions shape the world. She grounds the story well, and the medical descriptions as she works was a real pleasure to read. No info dumping, just masterful layering and adding to the history and current technology available to the characters.

Ammar and Rodrigo are both exiled from their homelands for doing what they felt was right. Both accept their fate, and make their way to the court of King Badir in Ragosa. Jehane has fled her home town of Fezane and found employment as a court physician for Badir at the same time.

The first time Ammar and Rodrigo meet each other in Ragosa is electric. It's one of my favourite parts of the book to be honest. They are both comfortable and self assured with the power they possess. The writing and pacing here is a sheer joy to read.

This whole book just works. The pacing is pure joy and the characters are compelling. Not just the main guys, the fringe characters are given enough page time to develop fully without becoming the focus of the story. The cities are all unique with deft touches to differentiate between them.

Seriously, everybody should read this book. It's the best damn thing I've read this year, and possibly the most beautifully crafted work I've read in the last two years.