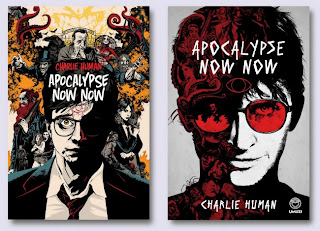 The Blurb: I LOVE THE SMELL OF PARALLEL DIMENSIONS IN THE MORNING

Baxter Zevcenko's life is pretty sweet. As the 16-year-old kingpin of the Spider, his smut-peddling schoolyard syndicate, he's making a name for himself as an up-and-coming entrepreneur. Profits are on the rise, the other gangs are staying out of his business, and he's going out with Esme, the girl of his dreams.
But when Esme gets kidnapped, and all the clues point towards strange forces at work, things start to get seriously weird. The only man drunk enough to help is a bearded, booze-soaked, supernatural bounty hunter that goes by the name of Jackson 'Jackie' Ronin.

Plunged into the increasingly bizarre landscape of Cape Town's supernatural underworld, Baxter and Ronin team up to save Esme. On a journey that takes them through the realms of impossibility, they must face every conceivable nightmare to get her back, including the odd brush with the Apocalypse.

The covers are stupendously pretty. I've included both the RSA -right- and UK -left- covers for the first time, since this is one of the few books where I like both. On most books the UK cover is miles better than the US cover, but Joey Hi-Fi did his usual thing and knocked it out of the park. I love the RSA one on the right a little bit more, but that's just me. I was under the impression that the left one was for the USA, sorry about that.

This is Mr. Human's début novel and it was well worth the wait. It's one the few books based mostly in South Africa I've read, which is a damn shame since I enjoyed knowing the lay of the land so to speak. Baxter's South Africa definitely isn't the normal South Africa. Cape Town, the mountain and some of the history is present and seems quite similar. Then Mr. Human's insane brain rips the carpet that you think you know from underneath you, rolls you up in it and transports you into a strange, twisted world.

Baxter is a 16 year old high school student. No, this novel isn't YA, promise. His school has competing gangs who peddle drugs and guns, which is a bit weird. Baxter has assembled his own crew, The Spider, who carved out a niche for themselves supplying the youth of suburban Cape Town with porn in all it's forms. Baxter plays the bigger gangs off each other to keep the peace, or at least he tries to. A little slice of a big cake is a lot better for everybody than no cake at all. Baxter has his booming business, his girl and things are looking rosy for the little crime lord. At least for a little while.

Baxter is one screwed up kid. This is apparent quite quickly in the novel, since he is the main POV throughout. A scheming little bastard that uses everybody around him to further his own goals. When his girlfriend, Esme, is kidnapped, he's faced with something strange. It seemed there is a possibility he really loves her and he wants to rescue her.

So is this book a straight up urban fantasy where the hero is faced with the dilemma of having to rescue someone he loves? No, not even close. Baxter is too strange for that to be the main issue.

The world Mr. Human has created is insane. In every way. He's taken San Bushman and African gods, parallel dimensions , pop culture, some standard fantasy creatures and Afrikaner mythology, blended them together in who knows what and used the resulting mixture as paint to construct a scary, dark absolutely addicting world for his characters to play in.

The story goes along at a breakneck pace, especially when the wheels start to come off for Baxter and he's exposed to the real world he never even imagined existed. It's stupendous. One of my favourite parts in the middle of the novel is a stutter step in the pacing, done so damn well I still smile thinking of it.
The supporting cast is written well, with the important players given enough back story and hints of motives to flesh them out.

Honestly, read this book. As Mr. Human's first, it's written beautifully. I can't wait to read his next.