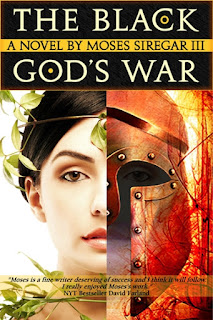 The Blurb: Against the backdrop of epic warfare and the powers of ten mysterious gods, Lucia struggles to understand The Black One.

Her father-king wants war.
Her messianic brother wants peace.
The black god wants his due.
She suffers all the consequences.
King Vieri is losing his war against the lands of Pawelon. Feeling abandoned by his god, he forces his son Caio, the kingdom’s holy saviour, to lead his army. Victory ought to come soon.
To counter Caio’s powers, Pawelon’s prince enters the conflict. Rao is a gifted sage, a master of spiritual laws. He joins the rajah to defend their citadel against the invaders. But Rao’s ideals soon clash with his army’s general.
The Black One tortures Lucia nightly with visions promising another ten years of bloodshed. She can no longer tell the difference between the waking world and her nightmares. Lucia knows the black god too well. He entered her bed and dreams when she was ten.
The Black One watches, waiting to see Lucia confront an impossible decision over the fates of two men—and two lands.

This is Moses Siregar's first book, independently self published. Boy, that must have been quite bloody difficult. He deserves a huge bag of Kudos for that. Now, to the story!

The tale is very much like the legend of Troy, with a ten year war between two nations. Each side has their heroes. The Rezzians are religious and their born saviour is Caio, born with the holy marks from the Gods. Pawelon has Rao, more a realist and atheist with magical powers.

That forms my first problem. There is a nation with ten gods who can perform miracles. They are devout and spiritual people who builds their lives to honour their gods. Then right next door are a nation of atheists, who believe that you can only trust yourself and should strive to better yourself for your own sake. They have no gods. It just didn't make sense to me that two such different nations should share a border. An ocean between them would have made it more bearable.

Rao is convinced of his own power and Caio believes his gods protect him and guide him. So quite two sides of the same coin. A bit of overlapping would have been nice to see. And more human.

The two main females, Lucia as Caio's sister and Narayani as Rao's lover, irritated me a lot. Caio seems like the only Rezzian who does not wholly believe in all the gods, and she tells you so all the time. She hates Danato, the Black god of death since her mother died during giving birth to her brother. She blames him. The rest of the people accept the gods as a unit, a perfect ten. She doesn't. It seems a bit clumsy. Narayani was a simpering wreck. Tagging along where she shouldn't be, complaining, crying, threatening suicide every other chapter. I was egging her on to kill herself. It would have helped.

The story was difficult to get in to, and for me that was the names of the people and places. Since the two nations are so different, the names and phrases of address differ quite a bit. So it's a bit of a schlep to get used to. The tactics used in the war from both sides only helped the story along, it didn't really make sense as war tactics.

The overall story is known for the most part, since it's a lot like the old legend of Troy. That made it an ok read. So, for a first, self published effort, it wasn't too bad.

It could have really done with a bit more editing. That would have straightened out a lot of the problems I  have with the book. But all in all, not a bad self published effort.