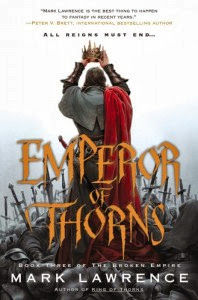 The Blurb: The path to the throne is broken - only the broken may walk it.
To reach the throne requires that a man journey. Even a path paved with good intentions can lead to hell, and my intentions were never good.

The Hundred converge for Congression to politic upon the corpse of Empire, and while they talk the Dead King makes his move, and I make mine. The world is cracked, time has run through, leaving us clutching at the end days, the future so bright that those who see it are the first to burn. These are the days that have waited for us all our lives. These are my days. I will stand before the Hundred and they will listen. I will take the throne whoever seeks to thwart me, living or dead, and if I must be the last emperor then I will make of it such an ending.


This is the third and final installment in the Broken Empire trilogy with Prince of Thorns and King of Thorns the previous brilliant two books. Could Lawrence bring this epic  series to a satisfactory close, or would the ending leave me scratching my head and feeling mildly irritated.

This book left me depressed. But in a good way.

The structure of the book follows the recipe of the previous two, with two timelines being interwoven throughout the book. The present and five year back flashbacks. We also have a few chapters from Chella's viewpoint, the necromancer who tried to kill Jorg in PoT, and who Jorg resurrected in KoT.

Chella is in service of the dread Dead King, and the rare glimpse into another character helps to show the motivations and machinations of the other side quite well. Chella is one bitter lady, hating Jorg for some good reasons. It was interesting to read quite a bit about the Dead King, and having another viewpoint of the Broken Kingdoms was pretty refreshing.

Jorg is on the road and close to his goal. Attending the Congression with his plans moving along to help him become Emperor, the first in hundreds of years. His motivations isn't completely selfish which shows that our favorite psychopath has a little bit of a soft side. Maybe it's because he became a father, maybe it's because Jorg isn't as evil as everyone thought after Prince of Thorns.

Being the King of seven kingdoms and married, Jorg has certainly grown up. He's not a kid any more. He is certainly more calculating in this book, thinking, scheming and planning ahead. Less compulsive neck stabbing. He has grown by leaps and bounds over the three books, and you cannot help but love him. He's easily one of my favorite characters in literature.

The whole flashback thing was perfectly done. During the previous two novels it felt at some times that the flashback wasn't really there for any other reason than to show why Jorg is well, Jorg. Thinking back now, each and every one was critical to the story. It should actually be viewed as one book with three parts, with the flashbacks interweaving the story and binding it all together. As soon as I have time I'm going to read all three back to back, which should make this close to perfect series even better.

The ending is intense, and comes as quite a shock. Lawrence always said that this is a trilogy, and he ended it strongly and perfectly.

I really do not want to spoil this book for anybody, so if you've read the other two and liked them, read it. If you haven't, go buy them. This is easily my favorite trilogy ever.

I was depressed after reading this book because, after I've finished it, I couldn't read anything else for about two weeks. Hell, it's taken me a month to get my thoughts together to write this quick review. And that is what a book should do to a reader. It should make them emphasize with the characters, think about the story and influence them in real life.

This one certainly did that, in spades. I'll never forget Jorg and his Brothers.