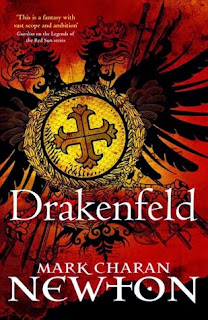 The Blurb: “I am Lucan Drakenfeld, second son of Calludian, Officer of the Sun Chamber and peace keeper. Although sometimes it seems I am the only person who wishes to keep it …”
The monarchies of the Royal Vispasian Union have been bound together for two hundred years by laws maintained and enforced by the powerful Sun Chamber. As a result, nations have flourished but corruption, deprivation and murder will always find a way to thrive.Receiving news of his father’s death Sun Chamber Officer Lucan Drakenfeld is recalled home to the ancient city of Tryum and rapidly embroiled in a mystifying case. The King’s sister has been found brutally murdered – her beaten and bloody body discovered in a locked temple. With rumours of dark spirits and political assassination, Drakenfeld has his work cut out for him trying to separate superstition from certainty. His determination to find the killer quickly makes him a target as the underworld gangs of Tryum focus on this new threat to their power.Embarking on the biggest and most complex investigation of his career, Drakenfeld soon realises the evidence is leading him towards a motive that could ultimately bring darkness to the whole continent. The fate of the nations is in his hands.

I was honored to receive an ARC of Drakenfield from Mr. Newton, and with the publication date around the corner here are my thoughts on it.

First off I really like the cover. It's bold, colourful and will surely stand out on the shelves between all the hooded men and daggers populating the shelves. According to Mr. Newton himself, the cover is the banner of Detrata, the nation in which the story plays out. The plan is that the following books covers' will also depict the nation's flag in which the story takes place. That's a pretty smart idea and should make for a real striking collection of books.

The main character, Lucan Drakenfeld -who has possibly the coolest name ever in fantasy- , is a detective. As an Officer of the Sun Chamber it's his job to keep the peace and find those that disturb it. The first time that we are introduced to Drakenfeld he is busy overseeing the sentencing of someone who broke the law. It's not pretty, but shows that Drakenfeld is damn good at his job, fair and that the Sun Chamber is not to be messed with.

Lucan is summoned home on the death of his father, who was a highly placed member of the Sun Chamber. The travel home reveals quite a bit of the world we find ourselves in, and sets the first blocks for the rest of the woldbuilding that is necessary to the story. His struggle fitting back into society in the capital also helps the reader get the lay of the land and to figure out who some of the power players are early on,  which makes for fascinating reading.

The interaction between Lucan and his assistant, Leana, is well done throughout the book. Leana comes from a neighboring kingdom and the outside view she brings to proceedings is quite a nifty way to slip a few facts about the world into the story, fleshing out the world at large as well.

This book is light on the magic, seeing as it's honestly a detective novel. There aren't priests running around with godly powers, no wizard tower that rule the skyline and no flashing lights. Well, at least not yet. Some hints are made, but mostly as rumour and quickly dismissed by the involved parties. It makes for a refreshing change, seeing as we are spared the explanation of how the magical system works which can bog down a book for chapters at a time. This is a character driven story and I love it for that.

The main plotline of solving the impossible murder of the King's sister is well thought out and a real whodunnit headscratcher. False trails are laid bare and obstacles galore are placed in Drakenfeld's path. Drakenfeld also comes to realise that his father's death wasn't as clean cut as he was lead to believe and this personal case works well to add a lot of depth to the character.

There are more than enough twists throughout the novel to keep the pages turning at a brisk pace, and the conclusion of the case of the murdered princess is quite a doozy. Looking back on the book there were enough hints to figure out who was ultimately responsible, but how they accomplished the murder was brilliant.

I really like Mr. Newton's writing style, and it makes his prose a joy to read. I've not read that many murder mystery novels, but I'm surely going to be following this series very closely. This is a very fun book that made me think back on it, well after I've read it. Now that is what I look for in a story.