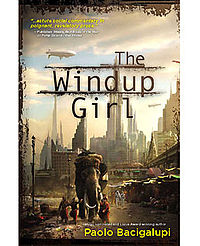 The Blurb: Anderson Lake is a company man, AgriGen’s calorie representative in Thailand. Under cover as a factory manager, he combs Bangkok’s street markets in search of foodstuffs long thought to be extinct. There he meets the windup girl – the beautiful and enigmatic Emiko – now abandoned to the slums. She is one of the New People, bred to suit the whims of the rich. Engineered as slaves, soldiers and toys, they are the new underclass in a chilling near future where oil has run out, calorie companies dominate nations and bio-engineered plagues run rampant across the globe. And as Lake becomes increasingly obsessed with Emiko, conspiracies breed in the heat and political tensions threaten to spiral out of control. Businessmen and ministry officials, wealthy foreigners and landless refugees all have their own agendas. But no one anticipates the devastating influence of the Windup Girl.


Now I know that I said I'll be reviewing Sophia McDougall's Romanitas, but it's still being read. You see, my Kindle decided to go flat the day we left for a weekend away, so I had to grab something off my TBR shelf. Yes, I still buy books, even though I own a Kindle. Nothing wrong with that. And The Windup Girl is well known, so I thougt it a good choice.

Bacigalupi's future sucks. The world's oil is finished, meaning the Global Village is dead. International travel is all but gone and electricity does not really exist any more. People are landlocked for the most part and stuck in their immediate surroundings.

Then the smart nutrition companies thought it a good idea to start ecological warfare. They designed viruses that attacked plants, and then produced the only virus-resistant grains to be sold to the highest bidder. This makes them more powerful than any government. Too bad they also suck at their jobs and things got out of hand. New plagues sweep the world and life is mostly miserable. Any resistant food is worth more than gold.

Thailand is one of the last "free" lands on earth. They are keeping their heads above water is some interesting ways, and it was really fun to read about a different culture for a change.

None of the main characters are real heroic. They are mostly bastards, but at least they are bastards for a reason and the reasons are there. The book isn't a nice easy read, but it is damn riveting. I have heard that people complain that all the plot threads does not get resolved, but if you activate your brain and think about the repercussions of the choices made in the book, it all makes sense. It's masterfully done, and a great read if you are looking for something a bit dirty and not straight forward,

There's murder, rape and even a little pillaging, and it all fits into the bleak world that we read about.

I demolished this book in two days, and when I was done I wished there was more to read.