The Alchemist of Souls - Anne Lyle 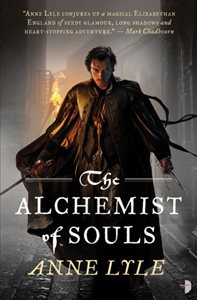 The blurb: When Tudor explorers returned from the New World, they brought back a name out of half-forgotten Viking legend: skraylings. Red-sailed ships followed in the explorers’ wake, bringing Native American goods – and a skrayling ambassador – to London. But what do these seemingly magical beings really want in Elizabeth I’s capital?

Mal Catlyn, a down-at-heel swordsman, is seconded to the ambassador’s bodyguard, but assassination attempts are the least of his problems. What he learns about the skraylings and their unholy powers could cost England her new ally – and Mal Catlyn his soul.

This is the first book of the Night's Masque trilogy by Anne Lyle, which falls under historical fantasy. I do not really care about subdivisions in the fantasy genre, but historical fantasy is big enough to warrant it. One of my resolutions was to broaden my horizons reading wise, and this fits in nicely, seeing as I've read very little historical fantasy up to this point.
The idea behind the novel is quite good. Set in Elizabethan England, the new world has been discovered. There are more than only Native Americans in the New World, Skraylings exist and they can use magic in a mostly seemingly unmagical world. They aren't easily dealt with and most of the common people fear them quite a bit. The Church is a major influence in peoples daily lives and brands them demons. So the potential for chaos is everywhere.
The story centres around Mal Catlyn a gentleman who has fallen on hard times and is thus expendable but useful to the crown. He carries a lot of personal baggage and he most certainly do have his flaws, but all in all he's a solidly developed main character.
There's quite a big focus on actors and plays, seeing as the acting-groups in the city are to perform in a competition in honour of the Skrayling ambassador. Most of the secondary English characters sprout from here. There is a woman disguised as a man, but it is done well enough, with good enough reason that is does not spoil the story. The other guys stand up well on their own, and it was a nice change of pace from the usual wizards, mercenaries and princes.
Historical accuracy really can go take a flying jump in terms of importance in historical fantasy in my opinion, but it does seem that the accuracy is present in the novel. I would have liked a bit more of yo olde London though, since it seemed as if the story could have been based anywhere. It's might be a pet peeve, but it didn't feel dirty enough to me for some reason.
The first half of the book is used to set up the story and a bit of a slog to read, but as soon as the story gets going, it goes off with a hell of a bang and a hell of a pace. It's quite nice, looking back on the book, that there wasn't loads of action with info dumps every second chapter. The info came in at the start, and the action later. The characters were well established by then, with their motivations laid bare.
The book is well written, the second half is paced well, there are enough hints into what could happen in the next two books that I'm more than interested in the rest of the series. This has the potential to be the introduction to an amazing world and truly wonderful series.
7/10

Email ThisBlogThis!Share to TwitterShare to FacebookShare to Pinterest
Labels: 7, Anne Lyle, The Alchemist of Souls