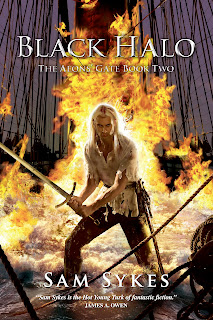 The Blurb: The Tome of the Undergates has been recovered... And the gates of hell remain closed. Lenk and his five companions set sail to bring the accursed relic away from the demonic reach of Ulbecetonth, the Kraken Queen. But after weeks at sea, tensions amid the adventurers are rising. Their troubles are only beginning when their ship crashes upon an island made of the bones left behind from a war long dead.
And it appears that bloodthirsty alien warrior women, fanatical beasts from the deep, and heretic-hunting wizards are the least of their concerns. Haunted by their pasts, plagued by their gods, tormented by their own people, and gripped by madness personal and peculiar, their greatest foes may yet be themselves.The reach of Ulbecetonth is longer than hell can hold.

So, this is the second helping in the Aeons' Gate saga. The story picks up where the first book, Tome of the Undergates, ended. No jump in time or place. It also starts almost the same as the first book, with a huge action scene to suck you back into the story.

The whole gang is back for more. Lenk, slowly going insane with voices in his head. Kataria, a conflicted Shict. Dreadaeleon, a teenage malfunctioning wizard, Gartiath, a suicidal Dragonman. Asper, a Priestess who is slowly losing her faith and Denaos, mostly drunk in the book.

A scruffy collection of Adventurers who are shipwrecked on a dead island, filled with giant cockroaches, lizardmen, Green Shicts and Purple Longfaces.

This sure as hell isn't your usual sword and sorcery adventure story, that's for sure.

I must be honest and say I did not really enjoy the first 100 pages of the book. It felt a bit chaotic and slow, but it did set up the rest of the book well. New characters and places are introduced, motivations for later actions are set in place and most of the stranded adventurers mope about and hate each other.

When the pace did pick up, it sweeps you along. Sam Sykes has the brilliant ability to bring some ridiculous situations and actions into his scenes, and it fits. It should't really, but it sure as hell does. Using a traitor as a cannonball distraction seems insane, but with his awesome use of the pause, reaction and characterization it works a treat. I haven't laughed this much at a book in quite a while.

His strength is in writing his characters, and they shine. We are treated to some glimpses into the adventurers back stories, making them a lot more interesting. Especially Denaos, who is portrayed as a cowardly drunk and seen as such by his companions, is turning into someone I really want to know more about. Each character has a unique voice, their internal monologues as they struggle with situations helping to strengthen their space as characters. They all have depth. They all have conflict. They are all awesomely done in their own way.

The overall plot also gets a nice shove forward and we are getting set up for the next book quite nicely.

If you are looking for character driven fantasy done different, then this book is a must.