Well, people of the world, I have good news and even better news. The good news is that tomorrow is a Public Holiday for South Africans. Workers Day if I remember correctly. I find it a little bit amusing that we get a holiday named Workers Day, but it may just be me.

The better news is that the bloody surgical staples has finally been removed from my scar riddled body. It's been over two weeks and were a main contributor to my scarce posting, seeing as I was irritated as hell  for most of the time and not in the mood to take it out on the poor, innocent internet. The nurse did say that I broke her personal staple removal record, with 85 of the little hellish pieces to take out.

So now I'm in a much better mood, at last. More scars, but that's OK. It makes me feel rugged. I'll post my review of this during the week: 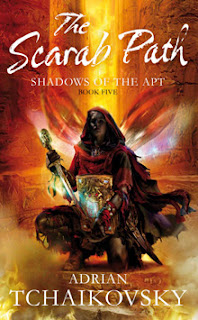 The brilliant Adrian Tchaikovsky's fifth book in the Shadows of the Apt series; The Scarab Path. I've read it, just working on the post. It's good anyways. Go buy it. And the previous four. You won't be disappointed.
Posted by johann at 15:13

Email ThisBlogThis!Share to TwitterShare to FacebookShare to Pinterest
Labels: Adrian Tchaikovsky, Shadows of the Apt, The Scarab Path