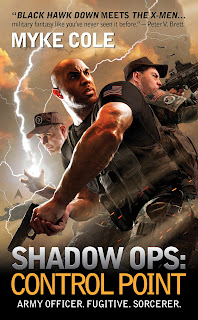 Across the country and in every nation, people are waking up with mag­ical tal­ents. Untrained and pan­icked, they summon storms, raise the dead, and set every­thing they touch ablaze.
Army officer Oscar Britton sees the worst of it. A lieu­tenant attached to the military’s Super­nat­ural Oper­a­tions Corps, his mis­sion is to bring order to a world gone mad. Then he abruptly man­i­fests a rare and pro­hib­ited mag­ical power, transforming him overnight from government agent to public enemy number one.
The SOC knows how to handle this kind of sit­u­a­tion: hunt him down–and take him out. Driven into an under­ground shadow world, Britton is about to learn that magic has changed all the rules he’s ever known, and that his life isn’t the only thing he’s fighting for.
I've been hearing rumours about this book since about August 2011. And those rumours were all good. So, naturally, I had to buy it. The first problem I encountered was that it hasn't being released in South Africa yet. Off to Amazon I went and lo and behold, since the book isn't being released in my local market, I can't buy the e-book. Now that was a bit of a problem, but not insurmountable. I scrounged around and ordered one from Exclusive Books, our biggest local book seller who bought a copy directly from the US publishers. Then, to put the cherry on the cake, I won a copy on Peter V. Brett's website the next day. So I have a feeling I own the only two copies in South Africa. Well, I will as soon as the signed copy shows up!
Now my first impressions of the book. I like the cover.  It sets you up for the whole novel, namely  magic use in the modern USA military. It's not cheesy, and it looks good against all the hooded men covers we have these days. The magic in the military is certainly the basic outline, but it isn't the whole story, not by a long shot.
People have started randomly manifesting magical abilities for no apparent reason. These abilities are quite specific, if you can fly you cannot use fire etc, and thus these new magic users are divided into different Schools. Now, since this started happening, a few laws has been passed in the USA. If you manifest, you join the Army or you die.
I can honestly see that happening in real life.
Some magical abilities are permitted. Most are prohibited, by order of some committee somewhere most probably. The prohibition isn't really explained, and that irritated me a little bit. But, since you are in the Military, you do as you are told, it made sense that it was left out.
The novel starts with a fight. The Supernatural Operations Corps gets a call to to a school where two kids are using unauthorised magic to destroy their school, with their classmates still in it of course. They go in support of a Aeromancer - means he can fly and play with lightning - who was sent in to take them out. It took me a little while to get into the rhythm and the language used, since Military is littered with acronyms and slang. And most of the characters are quite robotic to start off with, since you have to follow the rulesand regulations in the Military. Once I got into the groove it was a fun, fast paced book.
Our main dude, Britton, who is a helicopter pilot for the SOC, manifests in a forbidden school just after the incident and all hell breaks loose for the rest of the novel. I'm not going to go into it, since I do not want to spoil the story, but there are enough fight scenes, explosions and action present for two Michael Bay movies. And they are done bloody well.
The whole story is about the US military, but some mention of the rest of the world would have been nice. There's a passing reference that the rest of the world also have magic, but not how it is regulated or if it's as militarized as the poor guys in the USA. Hopefully it gets explored in the later books.
The characters really grew on me as the story progressed. They evolved as characters, being influenced by those around them as well as what they go through. The choices they make are explained and make sense, and they all have their own unique voices, which made me invested in their stories, which is one of the signs of a good book.
The concept behind the book is thought out well. It's implemented well. There is a load of murder and mayhem, but since this is a fantasy about magicians in the military, it's to be expected. The action is delivered in a brilliant way. Fast paced and chaotic, with the military training leading our characters to act calm and collected during all the action.
As a debut novel, it's a gem. It's unique. It's bloody, gritty and gory. Myke Cole delivered on the promises of all those rumours, and then some.
8/10
Posted by johann at 09:05