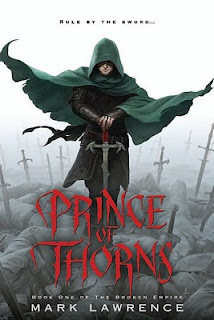 The Blurb: Before the thorns taught me their sharp lessons and bled weakness from me I had but one brother, and I loved him well. But those days are gone and what is left of them lies in my mother's tomb. Now I have many brothers, quick with knife and sword, and as evil as you please. We ride this broken empire and loot its corpse. They say these are violent times, the end of days when the dead roam and monsters haunt the night. All that's true enough, but there's something worse out there, in the dark. Much worse."

Once a privileged royal child, raised by a loving mother, Jorg Ancrath has become the Prince of Thorns, a charming, immoral boy leading a grim band of outlaws in a series of raids and atrocities. The world is in chaos: violence is rife, nightmares everywhere. Jorg's bleak past has set him beyond fear of any man, living or dead, but there is still one thing that puts a chill in him. Returning to his father's castle Jorg must confront horrors from his childhood and carve himself a future with all hands turned against him.

This is the debut novel of Mark Lawrence. I’ve seen it on the
shelves of bookstores and on Amazon for a while now, floating around my recommendation lists. I haven’t been that interested in it. The hooded man with sword cover has been done to death, and it sure as hell didn’t shout out to me “Read me, I’m awesome.” When the Best of 2011 lists started showing up and most had Prince of Thorns on it, I decided it should be worth my while.

Boy, am I lucky I listened to myself.

The setting of Prince of Thorns is a broken Empire, with everyone who has a claim competing for the throne. It’s been going on for generations, with no end in sight. The story is told from the viewpoint of Prince Jorg, who, when we meet him, leads a band of criminals and highwaymen on a spree of murder and mayhem. And all that at thirteen. They rape, pillage, murder and do all the dark deeds that could be thought off. Now Jorg as a thirteen year old bloodthirsty highwayman was a cause for me to pause and groan. I hate it when the hero is basically a teenager and he is the bestest and brightest in all that he does. He does impossible things on a regular basis in the book, and it almost spoiled it for me.
However, it all gets explained in quite a satisfactory way towards the end of the novel, which made me enjoy it a million times more.

The story is action packed, delivering fight scenes and normal conversation with fast pacing and a bit of insanity. The setting is one I quite enjoyed. It hasn’t been used to death and the setting alone promises to influence the way the story will unfold in the future. I won’t spoil it for you, but that alone is worth a read.
Jorg is a bastard, but the book is full of bastards and at least Jorg is a lovable bugger underneath all his faults and hurts. He even eats a heart, and I still like him.

There are magic in the world, but it isn’t the focus or that important in this novel. I’m sure that it will be included into the story a bit more in the next installment, but I didn’t miss it.

The only big faults with this book? Well, I don’t really care about the cover at all. And I wish I’ve read it sooner. That’s about it really.