I'll be reading and reviewing this over the weekend: 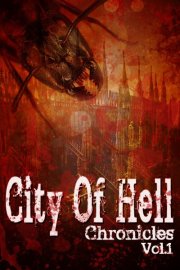 The Blurb: There is no god, no angels, no redemption. There is no hope, only suffering. The great Ant-headed Old-One has risen and brought hell to earth. The land is scorched and the human race decimated, eaten or tortured. Only three cities remain, a crumbled dying version of their former selves: London, Moscow and Hong Kong.The Old-One’s own City of Hell dominates most of North America. Its diabolical influence has turned ordinary citizens into torturers, debased slaves, lunatics and zealots.


Mwhahahaha! Should be an interesting read, watch for review on Monday.
Well, I'm off to my day job's year end braai. That's a barbecue to the uninformed. May everyone have an epic weekend.
Posted by johann at 11:08