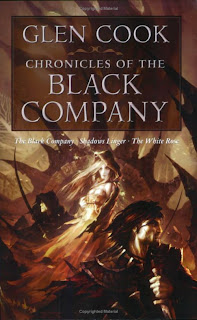 The Blurb: Darkness wars with darkness as the hard-bitten men of the Black Company take their pay and do what they must. They bury their doubts with their dead.

Then comes the prophecy: The White Rose has been reborn, somewhere, to embody good once more…
This omnibus edition comprises The Black Company, Shadows Linger, and The White Rose—the first three novels in Glen Cook's bestselling fantasy series.

I'm ashamed that it took me this long to read Glen Cook's work. I mean the first Black Company novel was published in 1984! In my defence, I haven't really seen any of his books on South African shelves for some reason. The other day I was browsing Amazon and came upon this; The Chronicles of the Black Company, consisting of the first three Black Company books namely The Black Company, Shadows Linger and the White Rose. I bought it and dove right in.

The whole story is told from the Point of View of Croaker, the Company's main physician and Annalist. It's his duty to note down battles and achievements so that following generations of the company knows of their deeds and their names. The Black Company is the Last of the Free Companies of Khatovar, and it's the Annalist's job to take the Annals back should the company ever be destroyed, even though none currently in the company knows if it still exists.

I found it hard going at first, seeing as we are just thrown into the story. The company is stuck in a contract. They can't just leave, seeing as their reputation would suffer. And as a mercenary company, reputation is everything. The solution to their problem comes because of some deft out of the box thinking.

They are signed on to go North, and here the story really kicks off and gets going. There's  the Dominator - super bad guy, his wife - just as bad, and their lackeys, Those Who Were Taken. It all sounds kind of like Erikson's Malazan books and Jordan's Wheel of Time books made love and this is their awesome offspring, but the opposite is of course true. The Black company was published in 1984, Eye of the World in 1990 and Gardens of the Moon in 1999.

So Cook is the daddy in my book. I know there are most probably earlier works that is in the same vein, but I do not know of them at the moment.

I'm not joking. The Malazan books and Wheel of Time books are definitely right up there in my favourites of all time. I know they aren't perfect, but I love them to bits. And the Black Company is right up there as well.

I must say that as soon as they sailed for the north, the story really took off. Since it's a purely single POV book, you get to know Croaker and his buddies well. He's not one of the main decision makers in the company, so he sees all. The friendly running battle between One-Eye and Goblin is especially well told throughout these books. There are battles, growth and difficult decisions along the way. This is a story of a mercenary company, so some rough stuff does happen but Croaker glosses over them, rather showing the good side of his comrades, as a friend should

What it boils down to is this. If you like Erikson and Jordan you'll love this book. It's on the same level as Gemmel's Legend for importance in their respective genres. A monster of a tale, and well done at that.

Email ThisBlogThis!Share to TwitterShare to FacebookShare to Pinterest
Labels: 10, Chronicles of the Black Company, Glen Cook