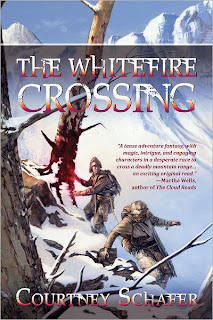 The Blurb: Dev is a smuggler with the perfect cover. He's in high demand as a guide for the caravans that carry legitimate goods from the city of Ninavel into the country of Alathia. The route through the Whitefire Mountains is treacherous, and Dev is one of the few climbers who knows how to cross them safely. With his skill and connections, it's easy enough to slip contraband charms from Ninavel - where any magic is fair game, no matter how dark - into Alathia, where most magic is outlawed.

But smuggling a few charms is one thing; smuggling a person through the warded Alathian border is near suicidal. Having made a promise to a dying friend, Dev is forced to take on a singularly dangerous cargo: Kiran. A young apprentice on the run from one of the most powerful mages in Ninavel, Kiran is desperate enough to pay a fortune to sneak into a country where discovery means certain execution - and he'll do whatever it takes to prevent Dev from finding out the terrible truth behind his getaway.

Yet Kiran isn't the only one harboring a deadly secret. Caught up in a web of subterfuge and dark magic, Dev and Kiran must find a way to trust each other - or face not only their own destruction, but that of the entire city of Ninavel.

I know this book was published in 2011 and generated quite a bit of buzz at the time. It was more an accidental Amazon purchase more than anything else to be honest.

First off, Ms. Schafer knows what she's doing. Her sentences are beautiful and flowing, sucking you into the story. Dialogue is effortless and the worldbuilding that went into the book brilliant.

The two books that I read before this was a struggle to get through. I just could not get into the flow of them at all. The first few chapters of this book was a joy to read. Ninavel is beautifully constructed. The city is bustling, characters and cast varied, and it sounds like it's rich in history. The whole book could have been based in the city and it would have been good.

The thing is, Dev is a smuggler and outrider, both quite extramural careers. So of to the mountains we go! It becomes clear that Ms Schafer is a mountain climber, since it's a big part of the story. Dev scrambles up everywhere. It's not my cup of tea, but it was introduced in a smart way, so I'll take it. The journey over the Whitefires are a huge chunk of the story, but there are enough conflict to get me by.

The magic system isn't fully explained in the book, which I like. There are enough explanation and hints of how everything fits, and it's quite unique and done well. I wish magic was used more. Kiran, an apprentice mage, is quite a wet blanket for most of the story. He rolls over easily in most situations. I understand that it's because he has been shielded from the outside world for his whole life by his master, but I expected him to get some more backbone as the story progressed. I know he is a mage being hunted by his master, but some personal strength shining through would have been welcomed.

There are a few twists and turns and some weird decisions made along the way to force the story in a certain direction. The bad guys are solidly bad, not grey as most are these days. Murder, torture, power hungry. All the classics.

All in all it was an enjoyable holiday read  If you like magic and mountain climbing, it's a definite must read.