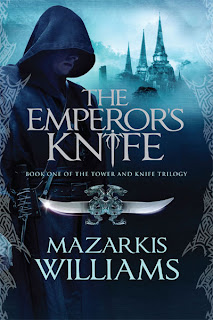 The Blurb: There is a cancer at the heart of the mighty Cerani Empire: a plague that attacks young and old, rich and poor alike. Geometric patterns spread across the skin, until you die in agony, or become a Carrier, doing the bidding of an evil intelligence, the Pattern Master. Anyone showing the tell-tale marks is put to death; that is Emperor Beyon's law...but now the pattern is running over the Emperor's own arms. His body servants have been executed, he ignores his wives, but he is doomed, for soon the pattern will reach his face. While Beyon's agents scour the land for a cure, Sarmin, the Emperor's only surviving brother, awaits his bride, Mesema, a windreader from the northern plains. Unused to the Imperial Court's stifling protocols and deadly intrigues, Mesema has no one to turn to but an ageing imperial assassin, the Emperor's Knife.
As long-planned conspiracies boil over into open violence, the invincible Pattern Master appears from the deep desert. Only three people stand in his way: a lost prince, a world-weary killer, and a young girl from the steppes who once saw a path in a pattern — a path that might save them all.

This book has been around for quite a while and recently I acquired a copy after hearing good things about the story on the internet.
First off, not a big fan of the cover. There's websites dedicated to the million Hooded Man covers we see these days. This one is a little too generic for my tastes. The Imperial Assassin - Eyul - is portrayed as an older man, and the dude on the cover looks thirty to me.
The world that Mr. Williams conjured up here is quite good and sadly under-explored in this book. Most of the story focuses and happens in the imperial palace and the surrounding city is rarely mentioned. I would have liked some diversification in the setting since the palace started to feel a little stifling and the surrounding city seemed very interesting.
The Emperor's brother is being kept captive like the Man in The Iron mask, but not to hide him but rather as a back up Emperor should something happen to Emperor Beyon. He's gone a bit insane as one is wont to do, but it seems he has some magical ability that helps him along. I cannot think that keeping him isolated in a room for years seemed like a good idea to anyone. He's Royal, so they could have secreted him in a Royal ranch or at least a wing of the palace. But that't just me.
The premise for the story is a unique one that should develop nicely in the following books. The bad guy - Pattern Master - can take over peoples bodies and basically zombify them. They sport pattern tattoos then as a part of the overall plan. I enjoyed this aspect immensely. I would have loved to read a bit more about the Pattern Master as well as the mechanics of the magical system used in the story since they seemed well developed in the background. I always say that I love character driven fantasy, but it needs to be supported by some world building and a little explanation.
I never really got into the pacing of the story, and it took me quite a while to finish. There are some definite well written parts, but I found some parts quite a muddle to get through. The Emperor's mother as well as Mesema irritated me quite a bit. The mother is plainly evil and Masema fell into her role too easily seeing as she was meant to be a barbarian horseperson. They rubbed me the wrong way. Tuvaini, the Grand Vizier is of course a power hungry ass, as the pointy hat decreed anyone who wears it to be.
As a first novel, it wasn't too bad. But it was a little clumsy for my taste.
For the cool ideas more than anything else, I rate this book 6/10.