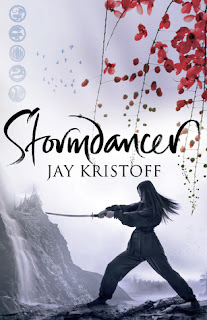 The Blurb: A DYING LAND - The Shima Imperium verges on the brink of environmental collapse; an island nation once rich in tradition and myth, now decimated by clockwork industrialization and the machine-worshipers of the Lotus Guild. The skies are red as blood, the land is choked with toxic pollution, and the great spirit animals that once roamed its wilds have departed forever.

AN IMPOSSIBLE QUEST - The hunters of Shima's imperial court are charged by their Shogun to capture a thunder tiger - a legendary creature, half-eagle, half-tiger. But any fool knows the beasts have been extinct for more than a century, and the price of failing the Shogun is death.
A HIDDEN GIFT - Yukiko is a child of the Fox clan, possessed of a talent that if discovered, would see her executed by the Lotus Guild. Accompanying her father on the Shogun's hunt, she finds herself stranded: a young woman alone in Shima's last wilderness, with only a furious, crippled thunder tiger for company. Even though she can hear his thoughts, even though she saved his life, all she knows for certain is he'd rather see her dead than help her.
But together, the pair will form an indomitable friendship, and rise to challenge the might of an empire.

First things first, that is a damn pretty cover. I like everything about it. It's pretty enough to hang on the wall as a piece of art, but since I have a Kindle copy that wouldn't really work would it?

Now then, Japanese Steampunk. It sounds awesome from the word go and it does throw up a beautiful world to play in. The classic parts of the country are all there. The out of touch insane Emperor, who only has the throne because of his bloodline. The Samurai who value honour and duty above all else, the Bushido code and servitude their main focus in life. And the common people who grease the wheels of privelege and does all the damn work who are so used to the world being like this that rebellion is the unthinkable.

Throw in a power-hungry guild who supplies the country with all it's power and innovation, wrap them in sealed armour, make them seem otherworldly and then you have a story! Oh, and chainsaw Katanas, which is just too awesome for words. And the Samurai's are basically tanks.

It says quite a lot about Mr. Kristoff's skills that the world he envisaged and built is so unique and special. The worldbuilding is done damn well, and since it is based on a culture that I'm not really familiar with, he explained it well without misusing the dreaded info-dump or through too much spoon feeding.

The first third of the story is what is explained in the blurb. It was an easy introduction into a world on the edge of environmental collapse. You got a sense of how the main characters think and got comfortable with them and Mr. Kristoff's writing style, and of course you know that Yukiko will meet the Thunder-Tiger. It didn't make it any less enjoyable to read.

The story from there is fast paced, with the back and forth between Yukiko and the Thunder-Tiger a highlight as the story commences. They develop and change as they get to know each other, and that sense of growth and love is a very nice touch.

The tale isn't without death and misery, but it's not the overriding theme in the book. The world is dying and the common people are being abused, but the overall feeling for me was one of  hope and trust, not misery.

The story isn't perfect, but of course no story can be. I felt the pacing was a bit tricky to get used to, especially in the opening few chapters. There are enough twists and turns to keep the overall arc interesting, but the ending wasn't a huge shock. It was very well done though.

Overall, this is a stunning debut by a very talented writer. The world he constructed here is unique and brilliant, but it does not overshadow the story itself. The characters are strong and interesting enough to live within this wonderous world without being swallowed by it.

Buy it. Read it. If only for the Chainkatanas.