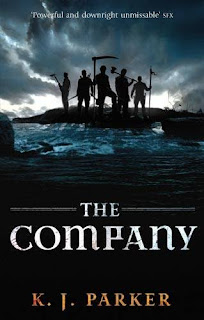 The Blurb: Hoping for a better life, five war veterans colonize an abandoned island. They take with them everything they could possibly need - food, clothes, tools, weapons, even wives.
But an unanticipated discovery shatters their dream and replaces it with a very different one. The colonists feel sure that their friendship will keep them together. Only then do they begin to realize that they've brought with them rather more than they bargained for.For one of them, it seems, has been hiding a terrible secret from the rest of the company. And when the truth begins to emerge, it soon becomes clear that the war is far from over.

I bought this book at a book sale, based on the awesome cover and that I've heard K.J Parker's name mentioned a few times on forums I frequent. It's the first Parker novel that I've read.

The story is centred on A Company, companions in war. Kunessin, a retired general, returns home to convince his old company - Aidi, Muri, Kudei and Fly -  to join him in one more adventure. And by convince I mean order, since they all pack up and leave with him without too much of a worry.

A Company were Linebreakers. They charged ahead of their own Pikemen and smashed a hole in the enemy's formation. The expected lifespan of a Linebreaker is four battles at most. A Company survived years. They are legitimate war heroes, and as with any realistic war hero, they are scary as all hell. This is quite a cool set up, as it cements the Company as badassess, with Kunessin their undisputed leader.  I also like it if an author can come up with an idea that's almost believable and awesome. I'm almost sure that the Linebreaker as depicted here is total fantasy, but imagine how cool it would have been if they existed.

The guys buy a ship and sail out to colonise an island which General Kunessin kindly liberated from the navy. They all get married so that they have wives to drag along, they'll obviously need kids down the line, and they have a bunch of indentured workers to do all the heavy lifting. So pretty well thought out and set up, like a military occupation is meant to be.

It is quite apparent that A company lives for each other. No one else matters, not even the new wives. As long as they are together and alive, the world is good. That is understandable, seeing their profession in the war and what they must have been through. Parker does manage to inject quite a bit of humour into the novel through this connection. Some of the interactions between the guys are priceless.

The wives and identured men do get enough page space to flesh them out as characters, and this was appreciated. It made the story more rounded.

The novel does drag a bit, but since it's mostly about the Company wanting to make a new life for themselves on the island and to please Kunessin, it's understandable. Farming is boring. It did make it a bit of a difficult read.

Throughout the whole novel we are told how brilliant the A Company is,  how they are the deadliest killers in the history of war, and they never get to show off their prowess. I guess Parker did this on purpose since they are retired and he seems a bit of a tease, and five guys alone against a battalion is not really that realistic. An extra flashback or two wouldn't have hurt the story.

The ending did feel muddled and rushed. I enjoyed the book, and I enjoyed Parker's writing ability enough to read his other books in the future, but the ending really disappointed me. It felt like he was up against the deadline and had to finish quickly, so he took quite the easy way out. It could really have been done better.

Email ThisBlogThis!Share to TwitterShare to FacebookShare to Pinterest
Labels: 6, K.J. Parker, The Company